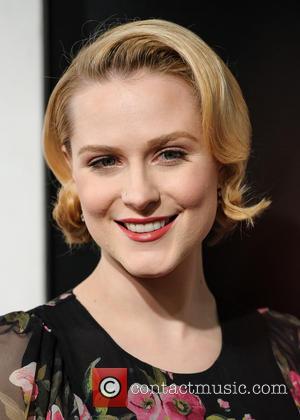 Evan Rachel Wood's unborn child sure has a story to tell his or her college buddies in years to come. The two-time Golden Globe nominee is expecting her first child with husband Jamie Bell, and showed off her baby bump at the Tribeca Film Festival on Monday (April 22, 2013).

The 25-year-old starlet tweeted, "Me and @KatCoiro just had our babies blessed by @snoopdogg today. No big deal" before posting a snap of herself and director Kat Coiro (also pregnant) with Snoop Dogg himself. The hip-hop superstar was at the film festival to promote his new album Reincarnated. Rachel Wood and Coiro glowed as they posed with the hip-hop superstar in Tribeca's press room. Snoop also had time to pose with actor Justin Long, who appeared equally as delighted to be in the presence of the man himself.

Of course, Evan Rachel Wood was attending the festival to promote her new movie A Case of You, which premiered Sunday night. It follows the story of a young writer who lures a girl online based on his embellished profile. The movie also stars Peter Dinklage, Sienna Miller, Sam Rockwell, Vince Vaughn, Brendan Fraser and Busy Philipps.

Evan is currently away from her 26-year-old husband, who's shooting the AMC drama series Turn about the formation of The Culper Ring during the summer of 1778. "Missing my stunningly beautiful & amazingly talented wife @evanrachelwood . Half of me is missing" Bell wrote recently to his 87,000 followers. Snoop Dogg Was At Tribeca To Promote His New Album Reincarnation