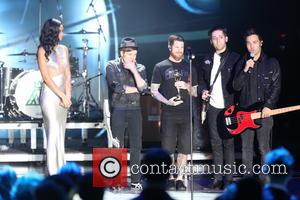 Frontman Gabe Saporta hinted about the band's latest member while bidding farewell to Suarez and guitarist Ryland Blackinton in a post online, and now new dad Wentz has confirmed he's the new recruit.

Prior to his big announcement, Saporta released a statement about his longtime bandmates' departure, writing, "It is with heavy hearts that today we announce the departure of Ryland & Alex from Cobra Starship... Although we were bummed when they first told us, Nate, Victoria and I love Cobras too much to not move forward. Not only because of what this band means to us, but also because of what Cobras stands for: To never give up, to never say die.

"We are also excited that tomorrow we will finally be premiering the video for Never Been In Love. The video takes place mostly in Sweden with Icona Pop, but it features one last cameo with Ryland and Alex. We are grateful to have had all these years with them and we will always support them, and hope you will too."