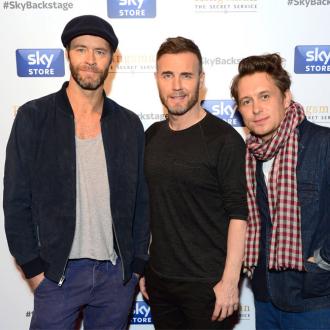 The Take That singer's favourite film of all-time is 'Star Wars Episode IV: A New Hope' - the first instalment in the iconic franchise - and the pop star loves it ''changed the world''.

When asked what movie is his favourite, he said: '''Star Wars'. The world changed when that movie came out, it changed forever. It took sci-fi to a mainstream audience. Brilliant, amazing characters, you know that we refer to them like Tom and Jerry... Chewbacca, Luke Skywalker, Darth Vader their names are synonymous with a whole generation - multi-generations now. They're just enormous characters that will stand the test of time. I just think it's brilliant the whole thing ... 'Star Wars' was just a worldwide smash that came out of nowhere.''

And Gary can't wait to get to see the new movie in the series, 'Star Wars: The Force Awakens', when it is released this December.

He added: ''It's brilliant that it's still going; the saga continues! I just think it's an exceptional movie.''

Gary's Take That bandmates Mark Owen and Howard Donald's best film is 'Star Wars' as well, but Howard also has a lot of love for comic caper 'The Hangover'.

Mark said: ''I probably will go for 'Star Wars' too! Because it was just an amazing era for film I think.''

Howard said: ''I would have said 'Star Wars', but as Gary's picking that one, I'm going to choose 'The Hangover'. The reason why is because it's your lads weekend away and it's in Vegas, which is one of my favourite places. And the fact that they just get trashed and they don't know what they're doing or where they've been is just great. I love the storyline.''

Take That were speaking to mark the launch of action flick 'Kingsman: The Secret Service' on Sky Store.

The guys surprised 20 lucky fans by popping in to the Sky Store 'Kingsman' movie experience at Sky Backstage before their concert at The O2 arena in London on Monday (15.06.15).

Take That's track 'Get Ready For It' features on the 'Kingsman: The Secret Service' soundtrack.

'Kingsman: The Secret Service' is available from Sky Store now.