Elvis Presley's UK chart record of achieving 20 top 40 hits in 88 weeks has been beaten by the cast of 'Glee'. 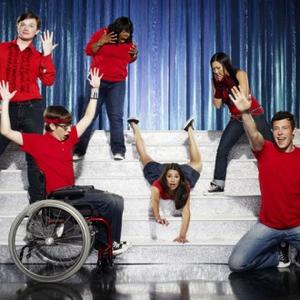 The stars of the musical drama TV show achieved the feat on Sunday (23.01.11) when their rendition of Britney Spears' 'Toxic' entered the UK singles chart at number 40.

Martin Talbot, managing director of the Official Charts Company, said: "This is a quite amazing achievement by the 'Glee' cast to be in the same company as the likes of Elvis Presley, in fact beating his 50-year-old record.

"The success underlines just how popular this TV show has become, as well as emphasising how digital downloading has transformed the consumer's engagement with music. The 'Glee' cast are superstars of the digital music age."

Songs from a host of top music stars have been reimagined by the 'Glee' cast - which includes Lea Michele, Matthew Morrison and Cory Monteith - including artists such as Madonna, Lady GaGa and Coldplay.