John Currin's topless portrait of Golden Girls actress Bea Arthur has sold for $2 million at Christie's auction house in Manhattan. The 1991 creation aptly titled 'Bea Arthur Naked' captures the beloved television actress from the waist up and was imagined from a full-clothed photograph of Arthur.

Notes on the auction house's website describe the portrait as "nostalgic and repelling" and clearly somebody agreed on Wednesday evening (May 15, 2013). The piece of work has been the subject of intense controversy in the past, though things took on a strange new turn before the auction when social media editors at the Daily Beast were locked out of their Facebook accounts for posting a photo of the portrait, an action initially considered a violation of terms. In an article titled 'Bea's Arthur Boobs Got Us Booted From Facebook,' social media editor Brian Ries wrote, "For a crime that wasn't a crime. For a so-called offensive image that was an actual piece of art valued at roughly $2 million. Way to go, Facebook people." 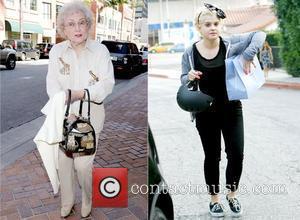