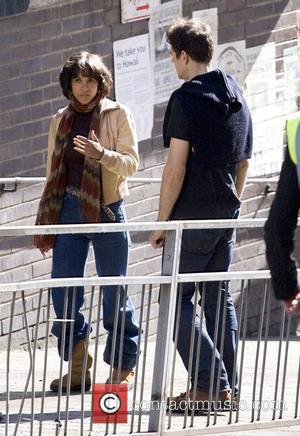 New Year's Eve boasts a skillful comedy director, Garry Marshal, and an imposing cluster of stars, including Halle Berry, Hilary Swank, Robert De Niro, Michelle Pfeiffer, Cary Elwes, James Belushi, Penny Marshall, Matthew BroderickBon Jovi, Zac Efron, Ludacris, Abigail Breslin, Katherine Heigl, Josh Duhamel, Ryan Seacrest, Sarah Jessica Parker, Ashton Kutcher, and more. (Oh, and New York Mayor Michael Bloomberg.) But, in his review in the Chicago Sun-Times , Roger Ebert asks, "How is it possible to assemble more than two dozen stars in a movie and find nothing interesting for any of them to do?" Mick LaSalle in the San Francisco Chronicle wonders the same thing. "What can be said," he asks, "about a movie that ... has all the stars in the galaxy and all the appeal of rotting fish?" Manohla Dargis in The New York Times says that the movie simply "interweaves more than a half-dozen gtrivial subplots into a cheerlessly cheery mosaic. The screenplay isn't written so much as assembled in carefully slotted little blocks." To several critics it seems as if plot and performance really doesn't matter. According to Wesley Morris in the Boston Globe , movies like New Year's Eve and Marshall's previous Valentine's Day are all about exploiting "our gluttony for famous people and special occasions with extra-strength celebrity overlap." Sara Stewart in the New York Post begins her review this way "If I say I don't much care for New Year's Eve, I risk sounding like a curmudgeon. But I have zero reservations about telling you how much I loathed New Year's Eve , a soul-sucking monument to Hollywood greed and saccharine holiday culture." And Linda Barnard concludes her review in the Toronto Star by voicing this wish "As we all link arms and sing 'Auld Lang Syne' we hope that somewhere amid the streamers and popping champagne corks director Marshall is making a resolution to stop making these [holiday-themed] movies. If he gets his hands on St. Patrick's Day we're done for."

Halle Berry wants to star in a movie with Zendaya

Halle Berry wants to return as Storm in the MCU