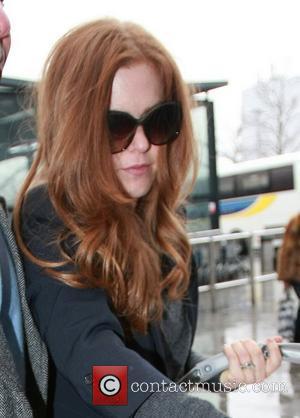 Picture: Isla Fisher arriving at the airport with her baby London, England - 23.02.11

Isla Fisher has written a new comedy movie named 'Groupies', which will star herself and Amy Poehler.
Isla Fisher, the Scottish-Australian actress and star of 'Wedding Crashers' has penned the script for the upcoming comedy movie, 'Groupies', reports Ctv News.Fisher, who voices a character in the new Johnny Depp animated movie 'Rango', says she wrote 'Groupies' to give herself the chance to play a strong comedy role. When asked about the current status of the script, Fisher said, "Oh you mean 'Groupies'? After Wedding Crashers I was just surprised as to the lack of comedic female material there is. So I had to start working and getting stuff out there for myself". The 35-year-old, who is married to 'Borat' creator Sacha Baron Cohen, says the movie should hit cinemas in the near future, adding, "Groupies is pretty close to being ready and I've got another movie called Life Coach which I've been working on. Hopefully one of them will go soon. It's more frustrating being in development than it is just to be cast in something". Fisher met English comedian Cohen at a party in Australia back in 2002. They became engaged two years later and married in Paris last year after Fisher had converted to Judaism.
Isla Fisher says fellow comedic actor Amy Poehler will play a rock groupie in the new movie and that the pair will also act as co-executive producers.