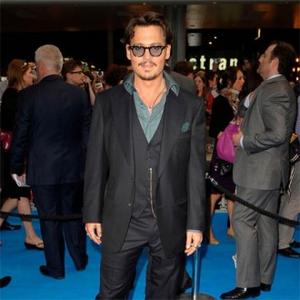 The Hollywood heartthrob is currently in Austin to promote new movie 'The Rum Diary' and stunned the crowd at the Continental Club by performing an impromptu set with ZZ Top's Billy Gibbons.

The packed venue - which was reportedly at three times its normal capacity - went crazy for Johnny, who stayed on stage for an impressive 90 minutes.

The 'Pirates Of The Caribbean' star played guitar on two songs during the 'Poison' singer's intimate gig.

Twelve songs into his 75-minute set, Alice announced the arrival of a special guest, "the bluesmaster, Mr Johnny D from Kentucky".

He then joined Alice on stage to play rhythm guitar on versions of the classics 'I'm Eighteen' and 'School's Out'.

Johnny has a history with rock bands as in 1997 he played slide guitar on Oasis song 'Fade In-Out' and on Shane MacGowan's first solo album.

He also formed the group P with members of Butthole Surfers, Sex Pistols and Red Hot Chili Peppers, and until 2004 was part-owner of the Los Angeles rock club the Viper Room.