Julianne Moore has been confirmed to star in a remake of 1976 horror film 'Carrie', which will Chloe Moretz play the titular role. 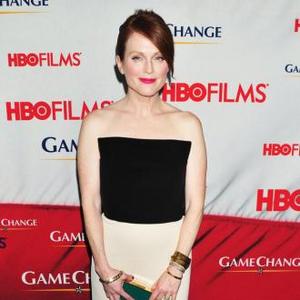 Julianne Moore has been confirmed to star in a remake of 'Carrie'.

The 51-year-old actress has signed up to play the titular character's abusive, fundamentalist Christian mother, Margaret White, in a reboot of the 1976 horror movie, which will see 'Dark Shadows' actress Chloe Moretz take on the lead role.

Julianne was offered the role of Margaret in March, while Chloe is thought to have beaten off competition from Dakota Fanning and Saorsie Ronan to play Carrie, an abused girl with psychic powers who experiences bullying troubles but gets pushed too far one night.

Kimberley is thought to be using Stephen King's original book as an inspiration for the reboot, which could see a new take on the story.

Chloe recently revealed 'Carrie' will be ''darker and more psychological'' than the original motion picture and similar to 2010 psychological thriller 'Black Swan'.

She said: ''It's darker and much more psychological. More 'Black Swan'. You're really looking into her mind and it really looks into the relationship of Margaret and Carrie. It's set in modern time, so it's a lot different.''

The 'Carrie' remake is scheduled for a March 15, 2013 release in the US, with a UK release date yet to be confirmed.