Julianne Moore is ''so happy'' she was crowned best actress for her role of Dr Alice Howland in the movie 'Still Alice' at the Oscar Awards in Los Angeles last night. 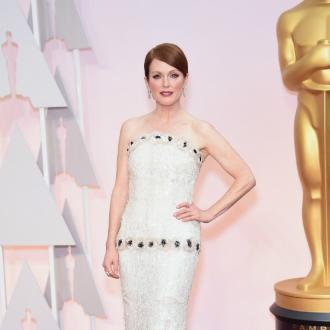 The 54-year-old star was over the moon when she picked up the big win of the night for her portrayal of Dr. Alice Howland, who suffers from the early-onset Alzheimer's Disease, in her movie 'Still Alice' at the Dolby Theater in Los Angeles on Sunday.

The strawberry blonde beauty looked stunning in a white floor-length strapless grown, which was embellished in crystals and subtle black detailing around the bust, hips and ankles.

She teamed the dress with simple sparkly earrings and kept her make-up minimal, but added a pop of colour with a dark lip.

The stunning star pushed her luscious locks off her face with the use of a low side bun to expose her defined jawline.

Meanwhile, Julianne admitted she spent four months speaking to women and doctors to prepare her for the role of Howland.

She explained: ''I like stories about real people and real relationships and real families.

''This movie had all of those things in it. It's about a real issue and relationships and who we love and what we value.''