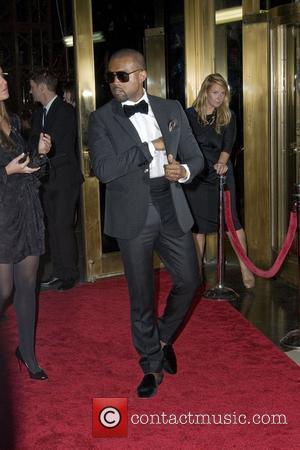 Kanye West changed the lyrics to his song 'Power' during his live performance on Saturday Night Live at the weekend, because they criticise the show's mocking of him, reports the New York Daily News. The 33-year-old bashes the late-night television show in the new song after they made fun of him over the Taylor Swift debacle at last year's MTV VMA Awards.
West sings the line, "F--- SNL and the whole cast", in the original version of the song, but when singing on Saturday night (2nd October 2010) the rapper changed the words completely, instead singing, "The brown hero, live from Ground Zero/MAChine gun flow, made her get a Ross Perot". However, it appears that the bad-boy singer was influenced by Lorne Michaels, SNL's executive producer, whom he bumped into backstage. Before performing, West left a post on his Twitter page that read, "25 Minutes to dress rehearsal ... Just saw Lorne Michaels ... uuuuuuuuuuuuuuuuuuuuuum .... Akwaaaaaaaaaaaaaaaaaaaard LOL!"
After playing 'Power', West also performed the song 'Runaway' and was joined onstage by a group of ballet dancers. He ended the live set in typically dramatic fashion, atop of the 'SNL' stairs, wearing a gold crown. This week's guest host was the 'Malcolm In The Middle' star Bryan Cranston.