The Duke and Duchess welcome a baby boy.

The fifth in line to the British throne is set to be born imminently as Catherine, Duchess of Cambridge goes into labour. Kensington Palace announced the news this morning and the press are awaiting the new baby's arrival at St. Mary's Hospital in London.

The Duke and Duchess of Cambridge at Cambridge's Shamrock Parade

The 36-year-old future Queen consort, known informally as Kate Middleton, is finally giving birth to her third child with Prince William. There's no word on whether to expect a Prince or a Princess, though Alice and Arthur are currently the bookies' favourites for baby names.

The irony is that today (April 23rd 2018) is St. George's Day, but it's unlikely they'll be honouring the nation's patron saint by naming the baby after him because they already have 4-year-old Prince George of Cambridge, who is currently the third in line to the throne. There's also 2-year-old Princess Charlotte, who celebrates her third birthday next week.

The Duchess was admitted to hospital just before 6am this morning; around the same time she went into labour with Charlotte in 2015. Fans of the Royals will no doubt be catatonic with excitement, with many having been waiting outside the Lindo Wing for several hours. Given that Charlotte was born within two and a half hours, it's expected that baby number three will arrive shortly.

More: Prince George is apparently fed up with school

Hopefully, it will be an easy labour for the Duchess; she's got to be ready for her brother-in-law's wedding in less than a month after all! Prince Harry will be marrying his fiancee, former actres Meghan Markle, on May 19th 2018.

The Duke and Duchess have welcomed their third child, a baby boy, into the world. The name is still not confirmed, but he weighs a healthy 8lbs 7oz and was born at 11:01am.

'Her Royal Highness and her child are both doing well', the Palace reported. 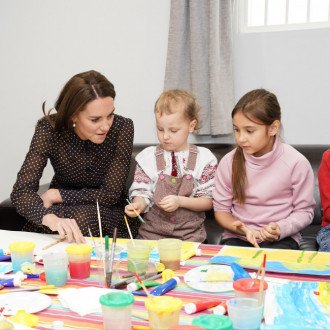