Katie Price gets no sleep because of Jett

Katie Price has admitted her baby son Jett's sleeping habits are a ''nightmare'' and she and husband Kieran Hayler have been exhausted since she gave birth to the tot in August. 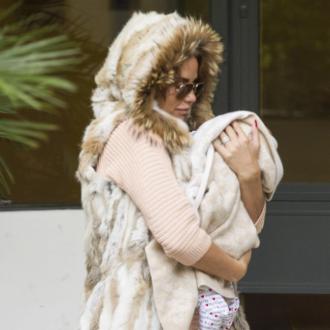 The former glamour model says her three-month-old son Jett's sleeping habits are a ''nightmare'' and she has been left exhausted since she and husband Kieran Hayler brought the tot home.

Katie - who also has 11-year-old son Harvey from her relationship with Dwight Yorke, and son Junior, eight, and daughter Princess Tiaamii, six, with her ex-husband Peter Andre - even considered calling in a professional to help nurse Jett throughout the night but she claims her beau has been very hands on with the newborn.

She told the new issue of OK! Magazine: ''[Do I get sleep?] No he's a nightmare! I said to Kieran, 'Oh my God, we're going to have to get a maternity nurse, I can't do this!' But then he text me the other day and said, 'Look, do you want me to sleep in the spare room with Jett tonight so you can get a decent night's sleep?' How sweet is that?''

Katie, 35, had to deliver Jett eight weeks prematurely when she was rushed into hospital for an emergency Caesarean section while on holiday in France after she contracted an infection.

Although he didn't have the easiest start in life, the star but insists her son is now doing really well, is gaining weight and is becoming a very cute chubby baby.

She revealed: ''He's a little porky pie. I call him a little potato. I'm not sure how much he weighs now, but he's in six-month-old baby grows.''