Katie Price has revealed her nine-year-old son Junior doesn't like her new breasts because he thinks they are too small now. 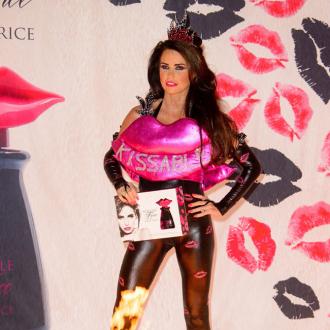 Katie Price's son Junior is unhappy his mum has made her breasts smaller because he doesn't think his friends won't think she's ''fit'' any more.

The 36-year-old star has reduced her breast implants by five cup sizes, bringing them down from a 32FF, but her nine-year-old lad Junior isn't pleased with her decision to reduce her massive chest because he, and his cheeky friends, loved her ''big boobs''.

Recalling the moment her son found about her surgery, Katie - who has now had seven boob jobs - said: ''Junior went, 'Oh my god, mum! What have you done?' I said, 'What do you mean?' He said, 'Where have your boobs gone?' I said, 'Junior it's a new me,' and he said, 'Mum, I like you with your big boobs. And my friends think you're fit because you've got big boobs.'

Admitting she was slightly shocked by his outburst, she said: ''I think, 'Oh my god, Junior you're only nine!' But boys are so forward these days.''

Katie insists her seven-year-old daughter Princess Tiaamii - her other child with ex-husband Peter Andre - isn't bothered about her breast reduction and always tells her she's beautiful.

The brunette beauty - who launched her fifth perfume Kissable Fierce last week - said: ''Princess always says, 'Mummy, you look so beautiful'. She always says that to me. So at least someone thinks I am. She's really girly, always wants to play with my hair and put make-up on.''

Katie is also mother to Harvey, 12, her son with ex-boyfriend Dwight Yorke, and 15-month-old Jett and eight-week-old Bunny, her kids with her current husband Kieran Hayler.