Bishop, who plays Ronnie Barker's Norman Stanley Fletcher in a new TV version of 'Porridge', says that PC is creating "a tough climate" for comedians in 2016.

English actor and stand-up Kevin Bishop has claimed that political correctness is generating “a tough climate” for many comedians at the moment.

The 36 year old was the star of BBC One’s special recommissioning of the classic sitcom ‘Porridge’ on Sunday night (August 28th), and spoke to Digital Spy before it was aired to speak about the state of comedy in 2016. Bishop reckons that he would never be able to broadcast the kind of material that helped bring him to stardom in the noughties.

CIA agent Kidman isn't a guy that likes to be messed around and when he's tasked with a new mission he's unsure where to even begin. His superiors have asked Kidman to employ renowned director Stanley Kubrick to work on a top secret assignment.

Heading to Kubrick representatives office, Kidman speaks to someone he believes to be his representative and presents the intruder with a very lucrative proposal.

Unknowingly Kidman is now falling into a scam set by Brit Jonny. Jonny thinks on his feet and comes up with an idea to scam Kidman out of his suitcase of money. Soon Jonny recruits his mate Leon to get involved with the scam and he pretends to be the famous director. With Kidman's limited knowledge of Kubrick and only a faded picture, it appears Jonny and Leon's plan is going to work. Kidman passes them the money and strikes a deal.

Ethan and Jaden are two street kids with a close knit group of friends, Amy, Tim, Rebecca and Brian, who they enjoy spending time with at the Old Garage youth centre in their town run by Gina. However, the small venue has become more of a problem than a necessary building in the eyes of the council who wish to demolish it unless they can cough up enough cash to own it. In an attempt to raise a few pounds, Ethan and Jaden put forward an idea to Gina; to put on acts in a show and sell tickets. Initially sceptical at first, the worried Gina soon allows them free reign as they audition a variety of talent from martial artists to BMXers and skateboarders as well as a several street dancers. Will the kids manage to save their beloved centre, or will their only inspiration for their passions be bulldozed to the ground despite all their efforts?

May I Kill U? Review

A pitch-black sense of humour provides some strong laughs in this satirical British thriller, but the undercooked script never manages to hold onto our interest. Packed with coincidences and contrivances, the story is just too sloppy, even if there's a provocative point worth making in here somewhere. At the centre is bicycle cop Baz (Bishop), who patrols southeast London as opportunistic crime is on the rise. At one hot-spot, he corners a looter and, in exasperation, asks for permission to kill him. The guy says yes, and Baz posts a video of the event on the web, disguising himself as an anonymous vigilante hero who's cleaning up the streets. Then things start to get strange. After he rescues a group of trafficked women, one of them (Koleczek) comes home with him, which annoys his bitter mother (Barber). He also befriends an elderly woman (Leach), who leaves him her house when she dies. And her nephew Seth (Doolan) isn't happy about this.

The story is framed by scenes of Seth interrogating Baz in a basement, so we see his vigilante spree in episodic flashback, including his awkward relationship with his partner (Axe), who barely suspects a thing. At least this adds some structure to the randomness of the overall narrative, which pings all over the place without filling in plausible details. But this also makes it impossible for Bishop to build any chemistry with his costars, even though all four main actresses are feisty and engaging. So the film as a whole begins to drag badly, never bringing any sense of focus to the loosely offhanded filmmaking style.

Continue reading: May I Kill U? Review 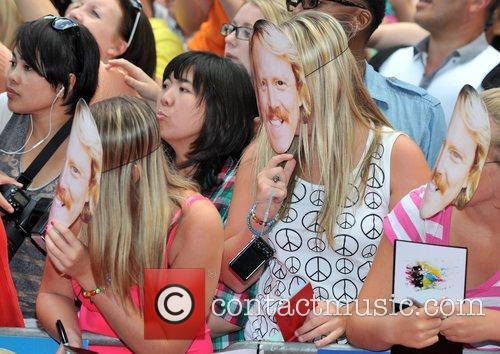 A pitch-black sense of humour provides some strong laughs in this satirical British thriller, but...