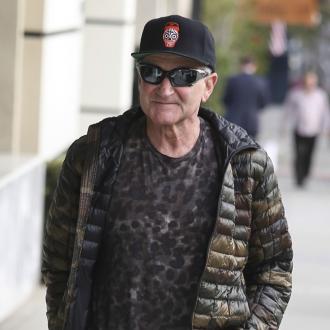 Kevin Spacey, Cher, Sharon Osbourne and Miley Cyrus are among the stars to pay tribute to Robin Williams.

The 'Mrs. Doubtfire' actor was found dead in his home in Tiburon, California, yesterday morning (11.08.14) in what is believed to be suicide via asphyxiation and Hollywood has taken to social media to remember the 62-year-old star.

His 'Shrink' co-star Kevin wrote: ''Robin Williams made the world laugh & think. I will remember & honor that. A great man, artist and friend. I will miss him beyond measure.''

Singer Cher reacted the news with a simple sad-faced emoticon, before recalling their long friendship and most recent meeting.

She wrote: ''He was Sweet LOVELY,Man.

It was who he was.I Know Well..Many X's from High There is Only Low.So Sad

''I was with him a little while ago we pretended to see Sharknados !

Sharon sent her condolences to the star's family, wife Susan Schneider and his children Zak, 31 Zelda, 25, and Cody, 23, on behalf of her own loved ones.

She wrote: ''I'm so sad and devastated to hear of the passing of Robin Williams. My thoughts are with his family.

''The entire Osbourne Family is grieving the loss of a kind, funny, generous and talented man, Robin Williams.''

'Wrecking Ball' singer Miley was left in tears by the news.

She wrote: ''I can't take the Robin Williams news. I've never cried over someone I've never met but I can't stop.''

She wrote: ''Mr. Williams visited me the first day of filming The Parent Trap. I will never forget his kindness. What an enormous loss. My condolences.(sic)''

Robin's 'Good Will Hunting' actress Minnie Driver said she was heartbroken by the tragic news.

She said: ''My Heart's broken. Robin was a beautiful, kind soul. Can't bear that he's gone. So incredibly sorry for his family. (sic)''

His 'Waiting For Godot' co-star Steve Martin was ''stunned''.

He tweeted: ''I could not be more stunned by the loss of Robin Williams, mensch, great talent, acting partner, genuine soul.''

Evan Rachel Wood simply posted a picture of the Genie from Aladdin - a character voiced by Robin - and wrote: ''Genie. You're Free''.

Ellen DeGeneres was another actress to put up a picture in honour of the 'Insomnia' actor, writing alongside the image of him being interviewed on her show: ''I can't believe the news about Robin Williams. He gave so much to so many people. I'm heartbroken.''

He wrote: ''@robinwilliams will always be my hero. We lost a beautiful soul today. RIP (sic)''

The stars of 'Girls' had a minute's silence on set to honour the star.

Lena Dunham tweeted: ''Just shared a moment of silence on the set for Robin Williams, a man who brought so much laughter, joy and healing to so many.''

Robin was last seen alive on Sunday night (10.08.14) before his body was discovered shortly before a call to the emergency services was made at 11.55am on Monday.

An investigation into the exact cause of death is currently underway and a forensic examination is scheduled to take place today (12.08.14) with subsequent toxicology testing to be conducted.