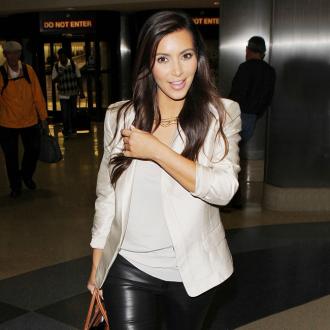 The 32-year-old reality TV star travelled to Oklahoma with Kanye and their two-month-old daughter North at the weekend to pay their respects to Portwood Williams Sr., who died on August 10 at the age of 98 years, while Kim's sister Kylie Jenner celebrated her birthday in Los Angeles with the rest of their family.

A source told People: ''That's why they weren't at [sister] Kylie's birthday. They brought North, too. Her first trip.''

36-year-old Kanye's grandfather was impressed with Kim when they met, calling her ''sweet and beautiful'' in February.

She was just down to earth, she's rich, and those kinds of people, they've got everything.''

While Mr. Williams - who was married for 72 years until the death of his wife Lucille - loved meeting Kim, he wasn't worried about if the couple married or not.

He said: ''Maybe they could have a successful marriage, but I'm not going to spend time worrying if they're going to make it or not.

I don't do weddings. I don't like weddings... You spend a lot of money, then in a few weeks, you're separated!''