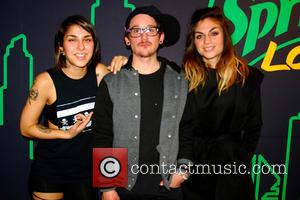 Sisters Jahan and Yasmine Yousaf have fired back at former Krewella bandmate Kris Trindl after he filed suit against the siblings for kicking him out of the group.

The producer/Dj is seeking at least $5 million (Gbp3.1 million) in damages, claiming the Yousaf sisters unfairly fired him when he refused to go back to rehab.

But now his former bandmates have responded to his legal action with a post on their Tumblr.com page, insisting Trindl quit the band voluntarily.

The message to fans reads: "We woke up this morning to the lawsuit Kris filed against us. As you all know, there are two sides to every story. We ask our fans to please be patient and not come to any conclusions until we are able to respond to the lawsuit with the truth. Our team has advised that we don’t get into any specifics until we can properly respond to the false claims made - most importantly being that we did not kick Kris out of Krewella, he resigned.

"We’re having a really difficult time today. As we write this letter to you, we are in the studio working on the second album. Please hang in there with us, the truth will eventually come out. Thank you for being so supportive, we love you guys."

Yasmine Yousaf, who was briefly romantically involved with Trindl, later added, "Today was 1 of the most emotional days of my life. I know I don’t even have to explain why, as the whole internet-sphere knows by now, but reading so many false claims about my sister and me coming straight from Kris cut me deeper than anything I’ve experienced in my life.

"I can’t say much as this is a legal issue (and I hope that none of you will ever experience a lawsuit and know what it feels like not to be able to defend yourself to avoid More false claims) but truthfully all I really want to say right now is thank you. Even though only one side of a story was put on blast, every single person who texted, called, DMed (Direct Messaged), and emailed me today had nothing but support in their words... You guys never cease to amaze me with your genuine concern and care that you have for my sister and me."