Kylie Minogue Returns To Television For The First Time Since Neighbours 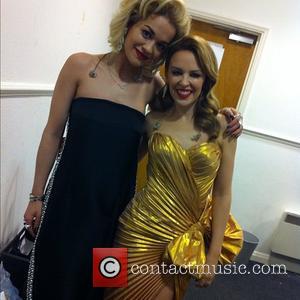 Picture: Kylie Minogue posted this image of herself with fellow popstar, Rita Ora to Instagram with the caption 'Great to see the lovely @RitaOra last night'

It's safe to say that, while television provided her with the platform she needed, Kylie Minogue is a popstar first and an actor second. But she'll be needed her skillset from the latter as she returns to TV in a black comedy drama on Sky Arts.

Hey Diddly Dee - about a group of actors putting on a play about Andy Warhol - will also star Homeland star David Harewood, and sees her in a rare television performance since she quit Neighbours to pursue an illustrious career in music. The show is by Stephen Fry and Sandi Toksvig's production company, Sprout, and written and directed by actor Marc Warren. She made a brief comeback in the Doctor Who Christmas special on BBC1 in 2007, and earned rave reviews for her most recent role in Leos Carax film, Holy Motors, last year. "I'd definitely love to do more acting. My heart cries out for it; it's such a deep longing," she told the Guardian in an interview at the time. "For years I've been waiting to get back into it and it just hasn't happened. Or, it has happened and it was so disastrous that I thought: 'Oh, it's just not for me.'"

Sky's head of drama, Anne Mensah, told journalists of the show: "I think there's a drama renaissance going on at the moment ... to add Sky to that mix, anything that Sky does makes the drama community in the UK just richer and more exciting."