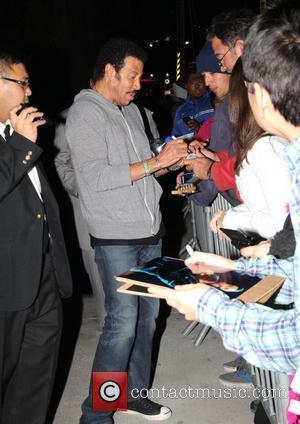 Lionel Richie 's latest album Tuskegee remains steadfast at the top of the US Billboard chart, even keeping Jason Mraz's new release from taking the Billboard throne. Despite weighing in with a career-best, in terms of both sales and chart position, Mraz just lost out on gaining his first chart-topper.
According to Billboard.com, Tuskegee shifted 114,000 copies in its second week holding the fort at number one the chart. Mraz's Love Is A Four Letter Word sold 102,000 in its first week of release. His last effort, We Sing. We Dance. We Steal Things' sold 73,000 in its first week, by comparison. Adele's Grammy winning album 21 is still selling astonishingly well, having shifted 90,000 units in the last week and remains in the top 3. In the number four spot, Train's album, California 37 also marked a career-high for them, selling 76,000 copies.
Adele may be flying the flag for the UK in the American music charts but she's certainly got some support there from the boy band One Direction, who have now finished their promotional tour of the States. Their album 'Up All Night' is just below Adele, at 55,000 (an 18 per cent decrease on last week's). Nicki Minaj's lengthy release Pink Friday: Roman Reloaded has fallen to sixth place, with sales of 48,000, just above Gotye's 'Making Mirrors' which remains at seven, no doubt helped by a recent appearance on his music on the hit TV show 'Glee.'