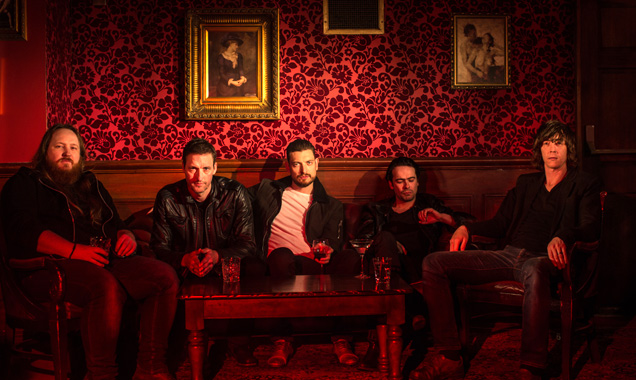 Interview with Little Matador At Live At Leeds 2014

Much has been made in the media of guitarist Nathan Connolly's rock band, Little Matador. The Snow Patrol musician's new project has been called "aggressive", "loud" and "angry" with debut album 'Little Matador' having been released last month. Trying to avoid focussing too much on the Irishman's other band, Contactmusic went along to meet Nathan and drummer Dave Magee.

Contactmusic: Hey Little Matador, how has your day been so far in Leeds?

Nathan Connolly: Great! We got here last night and we've planned out our whole day today. We really want to check out The Mexanines, I want to see Royal Blood, Courtney Barnett, Holy Mountain, Pulled Apart By Horses, The Amazing Snakeheads, The Hold Steady, The Wytches - the list goes on! And we've got to fit in performing.

I love festivals generally but at street festivals there seems to be a lot more excitement and [Live At Leeds] has an amazing line-up so we're definitely as much punters [as performers].

Dave Magee: Live At Leeds has an unbelievable line-up. It's got everything that you'd get at big festivals but without all the tents. The best thing about festivals is always the bands and the craic but the only thing that could make them better is loads of bars. So a street festival is essentially perfect.

CM: In the grand scheme of things, Live At Leeds is still a relatively new festival. [To Nathan] Would you say that was part of the allure for you to play here?

Nathan: Certainly, yeah. There's a lot of bands here that you just wouldn't get at a bigger festival. Don't get me wrong, festivals like T in the Park and Reading and Leeds are great but there is something about catching a band like Royal Blood in a venue like they're playing here. For us playing today, the music that we're making at the minute really belongs in sweaty rock clubs.

CM: Good job you're playing at the Cockpit then!

Dave: When we were growing up and reading the rock and metal magazines, Cockpit was the one in the north of England that was the spot.

Nathan: We're going to try to make the walls sweat!

CM: Nathan, you're hanging with a different crowd of fans these days. How does that experience compare?

Nathan: Well, it's not that alien to me really. I did this for years before Snow Patrol became successful. Certainly musically I listen to all sorts and me and Dave played in a band together before either of us had our other bands. I'm honestly having a ball and I think as a band we're thriving on that; the challenge of putting out what we're about. Until two weeks ago, no-one knew what we sounded like.

CM: Being the frontman of a band, do you find the attention intimidating or exciting?

Nathan: I love it! A little bit of everything, though certainly the performance side of it doesn't feel strange. I'm used to singing anyway. I'm really enjoying it even though it was never something I set out to do initially but just for this record it sounds right.

CM: The media has focussed on how aggressive and heavy LM is, but it's the softer moments that make us realise it's not just you venting.

Nathan: Thank you for saying so. There are aggressive and angry moments for sure but there are tender moments on it. I guess maybe not lyrically, but that's just something that comes out that we can't hide.

Dave: It's the way we got together originally; the essence of the origin of the band was just us in a room and it was like, 'Alright, plug it in, turn it up and go' so it would have been very easy to just go 'Rarrrghhh!' and bash all the heavy stuff out but it just didn't feel right. What's on the record is just what came out of us.

Nathan: We all write the songs, which is easy to lose sight of sometimes but I think that's really what the whole record is: aggressive, dirty and darkly beautiful in places.

CM: You recorded Little Matador in quite a short space of time, would you say this helped intensify the sound?

Nathan: I think it did help that, it's a good question. People focus on how intense [LM] can be but you don't think about how [recording] affects the music until later. It was pretty intense; we recorded the album in three weeks and we had three weeks of writing before that. Musically, it was very collaborative - there was always somebody else to give an idea. It was a fun and intense experience definitely.

Dave: There's a lot of things about the process that helped to intensify the record. We went in with this bunch of songs then quickly realised that we needed to think of others as well. We had no idea what it would sound like and it was a lot of intense work when we got in there but it paid off and we still had a lot of fun.

CM: Your album's different because unlike a lot of rock debuts, it's very melody driven in the same way as Queens of the Stone Age. Did spending time with them on tour help shape your view of Little Matador?

Nathan: We had made the record before we supported [QOTSA] but we're obviously fans of the band. There are some great bands that do that - that make great melodic rock music. Some bands come out all guns blazing and without thought, which is great too, but for me regardless of genre, song is the most important thing. We listened to everything during the making of that record; Band of Skulls, Sun Kill Moon, Tom Waits - everyone had their own influences. We wanted to make a modern rock record.

CM: Looking down the line, what would your dream merchandise item be to sell?

Dave: Beside the merch stall there'd be a bull pen full of bulls with our logo on the side of them so people can buy the bulls. [CM: A whole bull?!] Yeah! Like a live bull. Then there'd also be a bull run at the side of the venue, then we could bet on that and that's where we'd make our merchandise money. T-shirts are bNathan: I'm mostly trying to think of something selfish, like something that you can never find in a venue.oring.

Dave: On the spot tattoos?

CM: We really like the tattoo stylings of the album, where did it come from?

Nathan: It's a Dutch artist called Angelique Houtkamp. I've been a fan of her work for a while and she actually tattooed me a few years back. We asked her and she said yes. Speaking of merch, we've just had the transfers made.

CM: What's the biggest compliment anyone has paid you or the band so far?

Nathan: There's been a lot of goodwill towards us really. There have been a few journalists like yourself who got it a little more sometimes, recognising the more darker, beautiful moments on [the album] and that it's not just aggression. People will always box you and that's fine because the bands we've been compared to are those we're fans of. The blues element in our music has been picked up on and its subtle references like that that can be more exciting than people going, 'F**k! It's awesome! You sound like a skinny Queens of the Stone Age' even though that's not a bad thing.

Dave: Just like with any record, you just put it on and say 'it sounds like this' but when people actually listen to the songs they're actually getting where we came from - and some places that we didn't realise we were coming from! Queens is always going to be a welcome reference because they're a modern rock band and we wanted to make a modern rock record.

Thanks for your time, guys!