Little Mix Showed Their Support For Bandmate Perrie Edwards After She Broke Down In Tears During A Performance At Aol Studios In New York On Wednesday (19aug15). 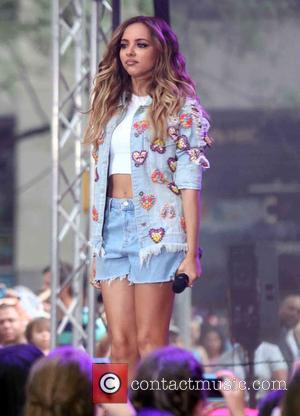 The British girl group was singing an emotional new track, called The End, when it appeared the pain of her recent split from fiance Zayn Malik overwhelmed Edwards, and as she sang the lyrics "And I won't be missing, missing you/And no one can love you, the way I used to do... But love isn't fair" she started sobbing.

The pop star's bandmates, Jade Thirlwall, Leigh-Anne Pinnock and Jesy Nelson, immediately embraced the emotional Edwards, as she wiped tears away from her eyes.

Nelson told the crowd, "It's been a long day, and we've had no sleep, so I think this is why this has happened. We're just very emotional."

Little Mix have been on a whirlwind promotional tour of the U.S., and during a visit to comedian James Corden's talk show on Monday (17Aug15), he asked the single star how she was holding up, prompting a smiling Edwards to respond, "You know what, I'm good... We're having an absolute blast in America. Things are going so well and I just wake up every day and I thank my lucky stars I have these three girls."

He then asked if the girls have helped her through the pain of the last few weeks and she replied, "One hundred per cent".

Malik and Edwards became engaged in 2013 and split earlier this summer (15).

The singer's Big Apple meltdown came on the fourth anniversary of the start of the girl group, which formed on British talent show The X Factor in August, 2011.