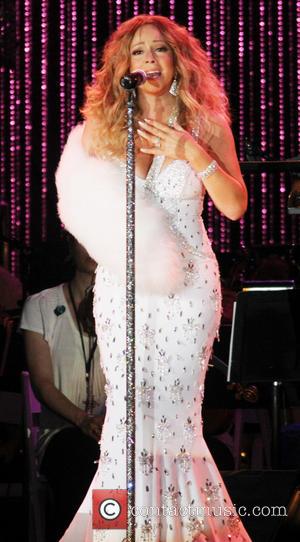 Mariah Carey is back in Peta's favour after assuring the animal activists the sling she wore to support her injured shoulder during a concert last weekend (13Jul13) was made from faux fur.

The diva fell awkwardly while shooting her latest music video and was hospitalised last week (07Jul13) with a cracked rib and dislocated shoulder, but she refused to let her injuries halt a planned Superstorm Sandy relief benefit show in New York City on Saturday - and she took to the stage wearing an assortment of slings.

One of them prompted activists from the People for the Ethical Treatment of Animals (Peta) to make a call to Carey's people - because it appeared to be made from fur.

But the animal rights organisation's Shakira Croce tells Wenn, "With all the unsubstantiated reports flying around about Mariah Carey being spotted wearing a Gucci fur sling for her dislocated shoulder, don't believe it. Her publicist has confirmed to Peta that the sling is faux fur and told Peta that Mariah had fashionable Faux fur slings made to go along with her ensembles.

"Peta salutes Mariah, who has always been staunchly anti-fur and even donated a pair of fur coats to us in 2006 after a Russian tycoon sent them to her as a gift."