Michael Douglas Spoke To More Than 1,000 Worshippers At A Temple In New York On Tuesday (22sep15) To Mark Yom Kippur. 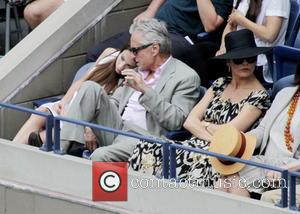 The Wall Street actor headed to Temple Shaaray Tefila in the town of Bedford as Jews fasted in honour of their holiest day.

He told how he is "reconnecting" with the religion after his son Dylan, who was also in attendance with the movie star's actress wife Catherine Zeta-Jones and their daughter Carys, began reading up on Judaism.

He also recalled how his famous father Kirk Douglas experienced anti-­Semitism when he first broke into Hollywood.

A spokesman for Douglas tells the publication, "He does love the faith and the culture, and he thinks the number of Jews is declining because so many are assimilating and marrying non­-Jews, him included. If you turn your back on these people because your mother was not Jewish, you're going to lose people... He's passionate about inclusion."

Douglas had been invited to speak at the temple by Rabbi David Greenberg.