Trace Cyrus Pulls Out Of Canada Concert Due To Health Concerns

Miley Cyrus' Rocker Brother Trace Has Cancelled A Gig In Toronto, Canada On Friday (17jul15) Amid Fears Entering The Country Could Trigger His Anxiety Disorder. 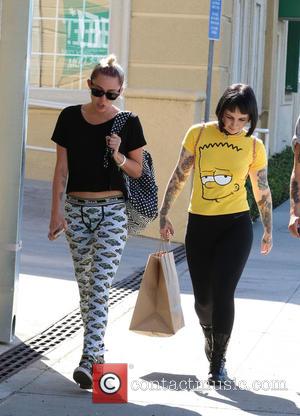 The Metro Station singer took to Instagram.com to inform fans he has previously suffered issues while crossing the country's border with the U.S., and blames his heavily-tattooed body for attracting the attention of authorities.

Cyrus revealed he had previously been interrogated by officials, which set off his "severe anxiety and panic attacks", and he insists he can not mentally handle the possibility of being questioned again.

He writes on the photosharing site, "Toronto I deeply apologize but I won't be making it to the Warped Tour date today in Canada. Most (almost) every time I cross into Canada, border agents treat me like a criminal. Even though I've never been arrested, had a DUI (Driving Under the Influence), or any serious trouble with the law. With the image I have I become an immediate target. One of my last times going there I was put in a room for hours and interrogated and searched till after hours of them finding nothing they finally let me go.

"I suffer from severe anxiety and panic attacks and the idea of being detained in a room against my will is just something I can't handle mentally right now... Never have I been treated this way in any other country... When u r (you are) part of a very famous family it seems they r (are) hoping they find something illegal just so they can make a news story about it and make an example out of me. I hope u guys can be understanding and realize I am deeply sorry and I will be back to Canada in the future to make it up to u (you)."