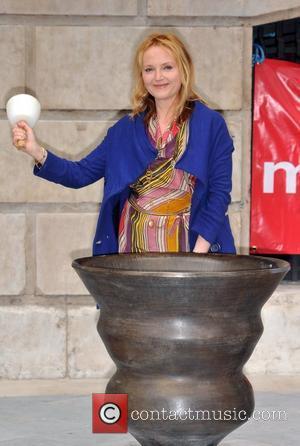 Picture: Miranda Richardson rings out the bells at St. Paul's Cathedral for the international day of biodiversity in support of the MEMO project. The MEMO project...

Miranda Richardson caused a panic on the set of period drama THE YOUNG VICTORIA when she almost passed out because her corset was too tight.
The film's star, Emily Blunt, admits Richardson told the cast and crew she could take a corset pinch as well as any actress - but found herself feeling more than a little faint during one dinner scene.
Blunt recalls, "I got close to fainting but Miranda Richardson got the closest call after claiming she was amazing in the corset and that she could take it as tight as anyone wanted. They did it really tight on her.
"She pulled a 'whitey', where she literally went white. We were sitting at the table for the dinner scene and we were talking and she literally keeled over at the table and suddenly started to go. She screamed, 'Get me out of it!' She was alright after that."
But Blunt thinks she may have passed Richardson as the best corsetted actress - because she now has a handful of period roles behind her and she has picked up some useful corset tips.
She tells WENN, "They (corsets) really look beautiful, but you do have to suck it in, as they say. We were told, when you're doing the corset up to breathe in so your ribs expand - because then you have a little bit of wiggle room once it's on. If you exhale they'll do it in really tight. That was good advice.
"I went on to two more films wearing a corset, so I must be a glutton for punishment!" A loggerhead turtle is born on a beach in Florida and starts on a journey...