'Selected Ambient Works Volume II' is a peculiar addition to the 33 1/3 catalogue. The ongoing series of travel-sized books that focus on a particular album has previously featured meditations on albums that have a cult fanbase (Slint's 'Spiderland') and ones that are the work of retreating artists (Neutral Milk Hotel's 'In The Aeroplane Over The Sea'), but Aphex Twin's critically-acclaimed ambient opus is far less penetrable than the subjects that have preceded it in the collection, and this is an obstacle that the book's author struggles to overcome. 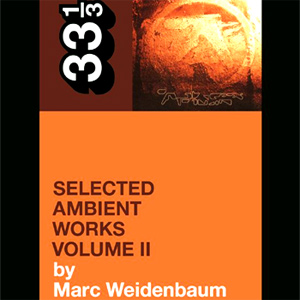 Marc Weidenbaum is a very good writer in the academic sense, and an incredibly well-read one. He is not, however, a writer that excites or intrigues, and nor is he one that gives any indication of, or indeed focus to, the primordial emotions experienced when listening to music. Where Kim Cooper's issue on Neutral Milk Hotel's 'In The Aeroplane Over The Sea' made up for the lack of input from the artist by dealing in euphoria, sorrow and wonderment, Marc Weidenbaum's offering is studious and slow-paced.

The opening passages are a particularly difficult read in which the meaning of the word 'beatless' is de-constructed over several pages and the word itself is repeated umpteen times. Marc's analysis is very well-researched and references a number of relevant and respected sources, but as an introduction to both the album and indeed to the book itself, it is far too po-faced and cyclical in its form.

The way in which he de-constructs particular tracks from the album is equally disengaging, listing their component parts almost as one would do with the ingredients of a recipe. One track is described thus; "...the basis of which is a quickly wavering sine wave. Above it is this wisp of a riff of a fragment, which shifts keys in a manner that is more conversational than melodic". Later on he tackles the issue of the tracks' titles (each track bar one on the album is 'untitled', although a set of unofficial titles have been almost universally agreed upon) by discussing posts on an internet message board, and you can't help but wonder if one would be a better host for such dry analysis.

The author can be forgiven to an extent, however. Although 'Selected Ambient Works Volume II' is a sonically rich album, it is, as you would expect given its title, entirely minimal and, for all intents and purposes, instrumental (there are vocals, but they are indecipherable and used for their tonal properties and not for the establishment of a narrative), and so there is very little room for personal interpretation. In this light, you can certainly respect Marc's thesis, even if you don't enjoy it.