Review of Different Every Time Album by Robert Wyatt

Released in conjunction with Marcus O'Dair's biography of Robert Wyatt, the Domino-released retrospective, 'Different Every Time', not only shares its title with O'Dair's biography but also, like the book, attempts to offer a comprehensive guide to Wyatt and his musical outings over the past fifty years. The thirty tracks are spread over two discs entitled 'Ex Machina' and 'Benign Dictatorships'. 'Ex Machina' touches briefly on Wyatt's early musical outings with The Soft Machine and Matching Mole before delving into an exploration of his solo work. The second disc, 'Benign Dictatorships', consists of tracks on which Wyatt has appeared as a guest. This serves as an enlightening guide to the diverse range of projects Wyatt has been involved in whilst highlighting the breadth of his influence. 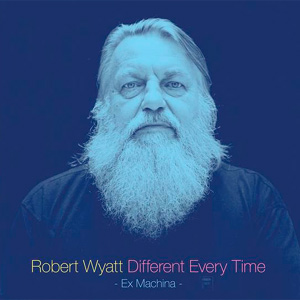 Disc 1 begins with 'Moon In June'; a sprawling 19 minute dose of prog-rock from The Soft Machine's 1970 album 'Third', which was the last Soft Machine album to which Wyatt, having played drums and sung for the band since their formation in 1966, was to contribute. The choice to open the thirty track collection with a 19 minute composition made up of stuttering organs and mumbled vocals which persist through time and key changes is indicative of the intentions of the album; 'Different Every Time' is by no means a greatest hits collection.

First impressions of the album's track list give rise to an immediate awareness of the omissions. Specifically, apart from the album title, 'Different Every Time' (which, incidentally, is a lyric from 'Sea Song', the opening track to Wyatt's 1974 album 'Rock Bottom') there is no trace of anything from 'Rock Bottom', despite its reputation as Wyatt's best record. However, the songs which are included on Disc 1, although not necessarily the tracks one might expect, offer a brief but enjoyable journey through Wyatt's discography. The self reflexivity of the lyrics "this is the verse" and "this is the chorus" on the Matching Mole track 'Signed Curtain' exemplify Wyatt's self consciously artistic approach to song writing and, much like O'Dair's biography, place emphasis on Wyatt the artist as well as Wyatt the musician. Moreover, Disc 1 offers unexpected yet pleasant surprises such as a cover of 'At Last I Am Free' which, written by Chic's Nile Rodgers and Bernard Edwards and included on Wyatt's 1982 compilation 'Nothing Can Stop Us', is by no means an obvious track to include but such inclusions enable us to consider Wyatt's career from a different, and refreshing, perspective.

'Benign Dictatorships', the second disc, which documents Wyatt's role as a guest performer, features a range of material by such artists as the British jazz ensemble Working Week, Pink Floyd's Nick Mason and Bjork. However, the structure of 'Different Every Time' and the reasoning behind the track listing remains elusive. For example, although Disc 2 is otherwise based around Wyatt's guest performances, his version of Elvis Costello's 'Shipbuilding' is included part way through the disc despite Wyatt being the central performer and artist on the track. It seems as if 'Shipbuilding', being a Wyatt recording and solo performance, would have been more in fitting with the material on Disc 1. But minor complaints aside, the 'Benign Dictatorships' places Wyatt's immediately recognisable vocal delivery amongst an eclectic mix of genres and musical backdrops. One of many highlights is the Hot Chip track 'We're Looking for a Lot of Love', in which Wyatt's voice, in all its delicacy and innocence, fuses seamlessly with Alexis Taylor's fragile vocal and the washed out synthesised string instrumentation. Additionally, Marcus O'Dair makes a transition from Wyatt biographer to Wyatt collaborator as 'Richardson Road', an atmospheric track from O'Dair's band Grasscut, is included on 'Benign Dictatorships'.

'Different Every Time' is far from a conventional retrospective, but its value lies in this unconventionality. The unexpected and often inexplicable track selection is part of the appeal and Disc 2 is a compelling compilation in its own right. The material across the two discs offers a satisfying introduction for Wyatt newcomers whilst also acting as a trigger for a further exploration of the depths of Wyatt's discography.