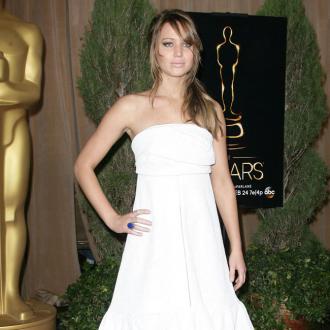 The film studio is hoping to turn the futuristic story into a rival film to hit box office saga 'X-Men' - which features an-all star cast including Jennifer Lawrence, James McAvoy and Anna Paquin - and tap into the current craze for superhero characters.

The sci-fi flick will be set in an alternate universe in which one percent of children are born geniuses with special powers, known as 'brilliants'. A federal agent who uses his superhuman skills to fight terrorists embarks upon a mission to take down a terrorist mastermind who is plotting a civil war.

Author Mark Sakey's previous bestsellers include 'The Blade Itself' and 'Good People', while 'Brilliance' will be published in July.

'Oz the Great and Powerful's Joe Roth and Palak Patel have signed up to produce, while Alex Hedlund will oversee the project for Legendary.

Legendary Pictures have a number of big films in the works, including a reboot of monster movie 'Godzilla' and Guillermo Del Toro's haunted house tale 'Crimson Peak', which is expected to star Emma Stone.