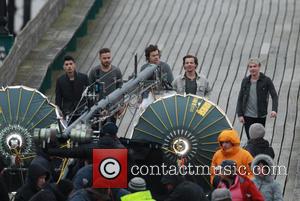 One Direction, Justin Timberlake and Demi Lovato were among the winners at the 2014 Radio Disney Music Awards on Saturday night (26Apr14).

The annual awards ceremony, which celebrates the most popular music stars among teenagers, was held at Los Angeles' Nokia Theatre and the public-voted honours went to a number of top pop acts.

Boyband One Direction were named Best Music Group, Timberlake was crowned Best Male Artist, and Demi Lovato landed the female equivalent, while her track Made In The Usa won Favorite Roadtrip Song.

Selena Gomez was also a big winner on the night, taking prizes including Radio Disney's Most Talked About Artist, Best Song To Dance To for Birthday and Song Of The Year for Come & Get It.

Other big winners included Taylor Swift, who landed the Fiercest Fans award and Best Musical Collaboration for her track with Ed Sheeran, Everything Has Changed.

Pop star Shakira was honoured with the Hero Award for her charity work.