Movie Stars Too? One Direction's 'This Is Us' To Dominate Box-Office

The One Direction boys should be top of the box-office by Monday. 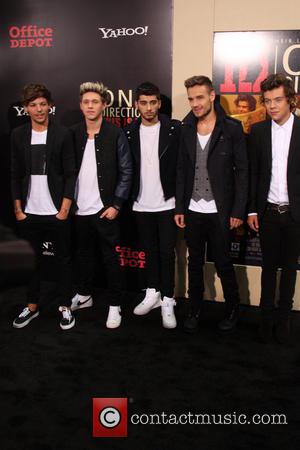 Morgan Spurlock's One Direction documentary This Is Us is expected to top the box office chart following its North American release this weekend. Early ticket sales suggest it will comfortably dispose of Lee Daniels' The Butler and comedy We're The Millers, as well as fellow new release Getaway, with Selena Gomez.

Most analysts suggest This Is Us will take somewhere in the region of $30 million to capitalize on an expected 20% drop in ticket sales for The Butler. Jennifer Aniston and Jason Sudeikis's We're The Millers and the Simon Pegg starring World's End - the final movie in the Cornetto trilogy - should take the third and fourth spots.

Over 80,000 fans turned up for the premiere of One Direction's movie in London's Leicester Square last week, pretty much cementing the group's status as the biggest pop act in the world.

"As a doc filmmaker, we're used to this, people camping out for movies, it's kind of the norm," Spurlock joked with The Hollywood Reporter about the experience, which he describes as "both spectacular and bananas."

"They're one of the biggest bands on Earth right now who, when we were diving in, were just on the precipice of exploding into such a global phenomenon. How do you not want to tell that story?" added Spurlock.

The director - known for his quirky documentaries including Supersize Me - also revealed how he had been approached by Sony to helm its previous two concert docs - Justin Bieber: Never Say Never and Katy Perry: Part of Me - but had been in production on his own films at the time.

One Direction This Is Us hits theaters on Friday August 30, 2013.

See all our pictures from the One Direction 'This Is Us' Premiere in London. Morgan Spurlock At The One Direction Documentary Premiere One Direction At The 'This Is Us' Premiere in London