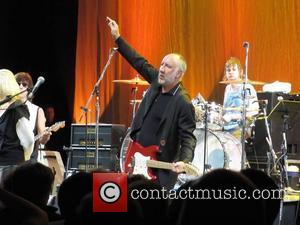 Picture: Pete Townsend and Zak Starkey of 'The Who' Rock stars unite for the 'Killing Cancer Charity Concert' held at The HMV Hammersmith Apollo London, England...

Pete Townshend, Jarvis Cocker and Franz Ferdinand frontman Alex Kapranos have signed a petition demanding a fair trial for Russian punk band Pussy Riot.
Former The Smiths guitarist Johnny Marr, Pet Shop Boys' Neil Tennant and singers Martha Wainwright and Corinne Bailey Rae are also backing the campaign in support of the three imprisoned rockers, Nadezhda Tolokonnikova, Yekaterina Samutsevich and Maria Alekhina.
The women face up to seven years in jail on charges of hooliganism after they showed their opposition to Russia's President Vladimir Putin by playing protest anthem Holy S**t in a Moscow church in February (12).
The signatories claim the performance was a "legitimate protest", and have urged Putin to give the bandmembers a fair trial amid reports the trio is allegedly being mistreated while behind bars.
The petition states, "We are extremely concerned about the treatment they have received since their arrest and during their trial...
"Dissent is a right in any democracy and it is entirely disproportionate that they face seven years in jail for what we consider a preposterous charge of 'hooliganism motivated by religious hatred'.
"We are especially concerned about recent reports that food is being withheld from them and that they have appeared in court in a cage. We believe firmly that it is the role of the artist to make legitimate political protest and fight for freedom of speech.
"As he visits the United Kingdom this week, we ask President Putin to ensure these three women receive a fair hearing."
On the third day of the Pussy Riot trial on Wednesday (01Aug12), Alekhina collapsed and was given emergency treatment after her blood sugar levels plummeted.