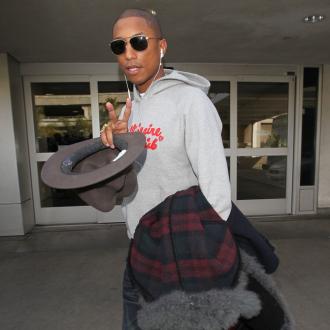 The 40-year-old singer, who was nominated for an Oscar for Best Original Song for the track, which was used in the film 'Despicable Me 2', is a big fan of the 'Move On Up' singer.

He told the Daily Star newspaper: ''I was pretending to be the masterful Curtis Mayfield. I hope he likes it, I'm trying to do what he would've done.''

The song has conquered the charts and although Pharrell missed out on an Oscar, he is overwhelmed by his solo success, after big collaborations with Daft Punk and Robin Thicke.

He continued: ''It's incredibly rewarding. I've never been so humbled in my entire life.

''It seemed like the most difficult thing ever, write a song for a mean-spirited character in the film who has this dry humour, trying to make him be happy.''

The song is taken from Pharrell's new solo album 'G I R L', which was released this week, and he insists it's the ''most important work'' he's ever done, with his favourite track being another collaboration with Daft Punk called 'Gust Of Wind'.

He said: ''It's my favourite because it's the first song that came to me.

''I've never had dreams about music before but I just woke up and I had it there.

''But those robots are so cryptic. they are like so 007 about everything.''

Meanwhile, despite his solo success, Pharrell is adamant he's still with his band N.E.R.D, featuring Chad Hugo and Shay Haley, and they have been working on new ideas.

Asked if the band were parting ways, he said: ''No, we're working on this animation project.''