Lady GaGa has sparked further controversy by lighting up a joint during a performance in the Netherlands.

Gaga’s publicity stunts just seem to be getting more and more controversial. Not content with teaming an Islamic burka with a bag bearing an offensive logo at a fashion show and continuously provoking anger from the PETA by wearing fur, the singer has now decided that her latest move to make sure she stays in the headlines is to advocate the use of cannabis. During a concert in Amsterdam (which, she commented, was the ‘appropriate’ place to mention her views on the drug), the ‘Born This Way’ hit-maker pulled out a large joint, sniffed it joking: ‘Holland is it real? Don’t tease me’ then lit it up in front of the crowd. Adding to the shock of the onlookers, she threw the still burning spliff into the unsuspecting crowd after taking several puffs. Many people commenting on the incident afterwards were unimpressed, some suggesting that she is a bad role model for her young fans.

The pop icon has previously mentioned her support of the drug, commenting on its medicinal purposes surrounding her ‘borderline positive’ diagnosis of autoimmune disease lupus and telling The Sun that it has ‘changed [her] life’ and been a ‘spiritual experience’. This is not the first time in recent months that Gaga has managed to upset people in large numbers. She was spotted at the Philip Treacy show during London Fashion Week sporting a traditionally religious burqa along with a handbag with the word ‘C**t’ written on it. A source told the Chicago Sun Times that the incident came across as a ‘clear insult to Muslims and Islam’. She has also been apparently been threatened by the PETA who, the same source claims, ‘are going to try and personally attack Gaga — spraying her with paint or even throwing faeces at her’ if she continues to wear fur. 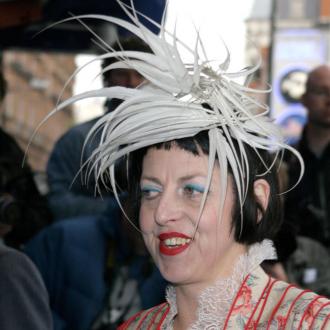 Philip Treacy: Isabella Blow could have had help