Review of Muchacho Album by Phosphorescent

Phosphorescent, the solo project of Matthew Houck, seemed to have established a comfortable grounding in the country tinged alt- rock genre, receiving critical acclaim with releases such as 2009's 'Willie' and its follow up 'Here's to Taking It Easy'. However, in his latest effort, 'Muchacho', a distinct change immediately becomes apparent. 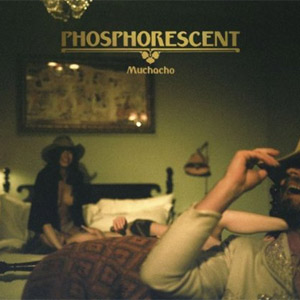 The opening track, 'Sun, Arise! An Invocation, An Introduction', begins with Kraftwerk-esque arpeggios and a deep reverberating bass line, hinting at a move towards a synthesized, electronic form of instrumentation. As you're about to check if this is actually Phosphorescent's new album, Houck's reassuring vocals join the mix and stability is restored. 'Song for Zula' is the album's finest moment, striking a perfect balance between the new found electronic, almost ambient instrumentation and the delicate, heartfelt vocals with which Phosphorescent made his name.

However, from atmospheric, mesmerising pieces to what can only be labelled as filler tracks 'Muchacho' isn't the most consistent album. Tracks like 'Ride On/ Right on' and 'Sun's Arising (A Koan, An Exit)' are easily forgettable. The album progresses and the mood takes a notably mellow turn. As the name would suggest, 'A New Anhedonia' is a dark, sombre track. Its heavy piano chords and pained vocals could have slipped unnoticed into Jason Molina's 'Songs: Ohia' catalogue. Similarly, 'Muchacho's Tune', with its folk influenced chord progression and lyrics depicting the engrossing nature of love, brings to mind much of Will Oldham's work. The traditional mood continues throughout the second half of the album with 'The Quotidian Beasts' and 'Down To Go' offering much of what we have previously come to associate with Phosphorescent.

Despite the initial difficulty adapting to the new elements Houck has incorporated into the Phosphorescent sound, 'Muchacho' offers a range of mostly satisfying pieces, with influences both old and new. Although you may have to skip a few tracks to thoroughly enjoy the album, Phosphorescent can't be blamed for experimenting a little, and the result is, in general, a successful one. By sticking to his alt. country roots whilst incorporating new electronic influences, Houck seems to be pushing Phosphorescent in a slightly different direction and, from what 'Muchacho' has offered, this is an exciting prospect.