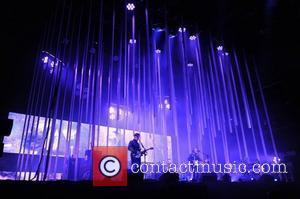 Radiohead have confirmed they are to play a secret show at the Glastonbury Music Festival tonight (24th June 2011). Radiohead's set in 1997 is often regarded as the greatest live performance in the festival's 40-year history and the band return for an intimate slot on the Park Stage at 8pm.
After days of speculation concerning the "special guests" on the festival's line-up, a spokesperson for the band confirmed they would be playing their first full live set since January 2010 this evening. Front-man Thom Yorke and guitarist Jonny Greenwood made an appearance on the Park Stage last year, mainly playing songs from Yorke's solo album 'The Eraser'. It is reported that Radiohead fans are already rushing to gain a place at the front of the Park Stage in anticipating of tonight's 8pm set. Speaking to NME on Tuesday, organiser Emily Eavis refused to be drawn on who would be playing the 'secret slot', saying, "We are still unsure of exactly who is turning up, mainly because it's unconfirmed at the moment! I swear I have heard every rumour - even that Led Zeppelin are playing!".
Radiohead are likely to play a selection of new material from their recently released album 'The King of Limbs'. They released the single 'Supercollider/The Butcher' on 16th April 2011.