'Pawn Stars' businessman Rick Harrison dons a flat cap, round sunglasses and a Triumph motorcycle T-shirt under a blazer as he poses for photos outside a New York studio ahead of his appearance on 'The Late Show With David Letterman'. 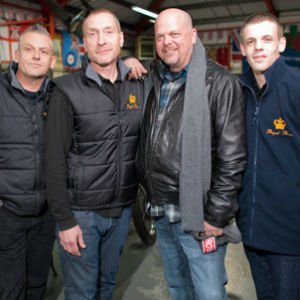 Danny 'The Count' Koker of the show Counting Cars presided over the marriage of his 'Pawn Stars' friend Rick Harrison and his partner DeAnna Burditt at the Ritz in Laguna Niguel, California on Sunday (July 21st 2013) - though still manages to get away with no sleeves on his suit.

The 'Counting Cars' automobile restorer took holy orders to become an ordained minister in order to legally marry his frequent co-star from his appearances on 'Pawn Stars'. He may have been known as 'The Count' before, but his latest career venture will no doubt earn him quite a few more nicknames - though, thankfully, he left the dog collar at home and opted for his usual beanie hat and sleeveless shirt.

Harrison also had his father Richard Harrison Sr. (known by most 'Pawn Stars' viewers as The Old Man) close by and roped in his Gold and Silver Pawn Shop colleague Chumlee as the ringbearer, while famously crude metal band Steel Panther was their main entertainment - though he has admitted there was a lot more organising than he had originally expected of a wedding. 'I just had no idea there was so much involved. I just thought you got a cake, had a party, buy a keg', he told People previously, despite having been married twice before.

By Elinor Cosgrave in Lifestyle / Showbiz on 23 July 2013

Rick Harrison, one of the employees of Pawn Star's World Famous Gold and Silver Pawn Shop, married Deana Burditt at a California wedding this weekend. The couple announced their engagement in February of last year. Since then Harrison has joked about Deanna's elaborate wedding plans which, he claimed in an interview with People, were entirely down to him.

By Hayley Avron in Lifestyle / Showbiz on 18 January 2013

That Pawn Stars wedding is finally going ahead, folks.

Rick Harrison, 47 has confirmed that not only have he and Deanna Burditt set the date, but also, “she’s sticking me with all the planning.” The date’s been set for July 21 (that’s going to swing round quicker than you could imagine, Rick, so you’d better get on with all that planning that you’ve been lumbered with! Originally, the couple were hoping to hold the wedding in Las Vegas, but they’ve now opted for the Ritz Carlton at Southern California’s Laguna Beach.

Despite Rick’s initial assumption that organizing a wedding consisted of little more than “you got a cake, had a party, buy a keg,” he’s fast realizing that he’s got his work cut out if he wants to supply Deanna with the perfect wedding, he’s going to have to do just a little bit more work than laying a keg on for his buddies. “I just had no idea there was so much involved,” he admitted “But we’re getting it done.” The guest list, it seems, has already expanded from 40 to over 100, so he’s already getting some idea of how this wedding planning thing works. You make a wedding plan. You change your wedding plan. then you change it again. And again. Ad infinitum.

By Hayley Avron in Lifestyle / Showbiz on 11 December 2012

Two reality stars of the TV show Pawn Stars were fined for trashing the campsite that they stayed at over Thanksgiving weekend with a group of pals. Little did Rick Harrison, Corey Harrison and the gang of unruly campers realise that in the state of California, if you leave a load of mess at your campsite, you’re liable to be charged because it’s officially a misdemeanour crime.

According to TMZ, Rick and Corey (the pawn shop boss and his son) were amongst a group camping in Glamis, CA on Thanksgiving weekend. The cops apparently know that their group was the one responsible for leaving the mess – which equated to 10 sacks of rubbish, no less – because they had already been called out to deal with them once over the weekend. Seems as though the Harrison’s forgot to read up on camping etiquette before they went on their Thanksgiving escapade.

Dumping trash in the campgrounds there is illegal and comes with a pretty hefty fine. The people involved have apparently been fined, to the tune of $1,000 per person. However, it looks as though Corey and Rick may have been spared the expense, as they were not actually among the last ones to leave. “We left the campground before our buddies did and they were to clean it up and apparently didn't follow through. My father nor I were cited.” Sounds like a lucky escape to us! 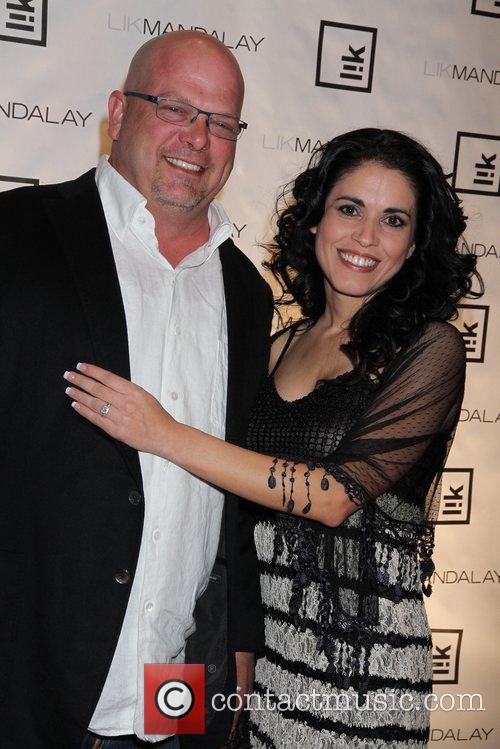