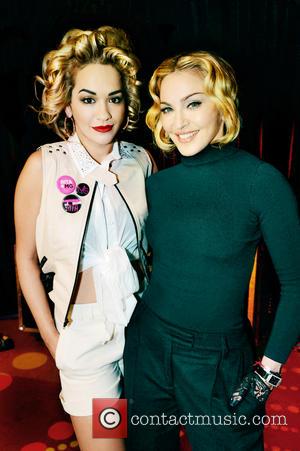 Rita Ora is hoping her new role as the face of Madonna's Material Girl fashion line will lead to a studio collaboration with the pop icon.

The singer recently signed a $765,000 (£494,000) deal to front Madonna's trendy clothing range for teens, and admits she has been quietly praying her Material Girl campaigns will pave the way for a duet with her idol.

Ora tells Britain's Daily Telegraph, "I would die if that happened. I would be the happiest girl on the planet, but I'm never going to ask her. I'll have to just dream one day she might. When I first met her, you could see in the picture (we took together) I was so nervous but she was so nice."

The R.I.P. hitmaker insists she has Madonna's daughter Lourdes to thank for landing her the job: "I was told Lourdes was a fan (of me), and she was really, really sweet and told her mum about me."

Madonna has previously recruited the likes of Kelly Osbourne and actress/rocker Taylor Momsen to be her real-life Material Girls.