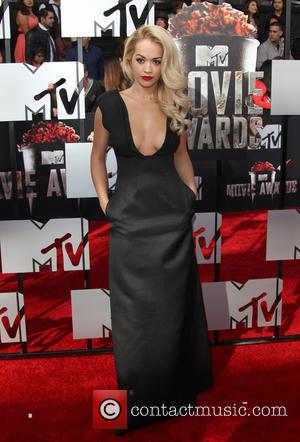 Pop star Rita Ora slammed a U.S. radio Dj on Wednesday (23Apr14) after he confronted her about rumours suggesting she once romanced Jay Z.

Last year (13), the R.I.P. hitmaker was at the centre of gossip linking her to the rapper, and during an interview with New York radio station Power 105.1's morning show The Breakfast Club, one of the hosts brought up the topic, asking her to clarify the story of an affair with Beyonce's husband.

The singer was quick to scold the host and exclaimed, "Don't you dare disrespect Beyonce like that ever again in your entire life. You should know better than that... that's just straight up disrespect. You can't even go there."

Later, she was asked about her current boyfriend, Scottish Dj Calvin Harris, and she appeared to be much keener to open up about their relationship, suggesting she and her man are in need of a proper holiday together.

Ora explained, "I think he's ready for us to go away together; I haven't been away with him in a long time. I want to take my weave (hair extentions) out, so it will be nice to spend some quality time."