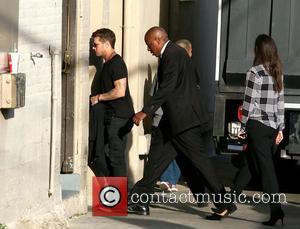 Picture: American actor and director Ryan Phillippe was snapped as he arrived to the studio for his interview on Jimmy Kimmel Live! in Hollywood, Los Angeles,...

Actor Ryan Phillippe missed the premiere party of his new Tv drama Secrets & Lies on Sunday (01Mar15), because an ice storm left him stranded in Philadelphia, Pennsylvania with his son.

The Crash star spent seven hours at an airport in the city when two of his flights back to Los Angeles were cancelled, and he eventually checked into a nearby hotel so he could watch the first episode with his 11 year old, Deacon.

He says, "I was a little bummed at first because the cast and the producers had an event here in L.A. that I was supposed to be at, but I ended up having a really beautiful premiere with my little boy and room service at the Four Seasons in Philly. It turned out really nice."

And he got to experience the show from his son's point of view: "Watching the show with him, he was jealous seeing me play a dad to other kids... He kinda would shield himself whenever I showed affection to my children on the show.

"I also play a potential murder suspect... and at the end of the premiere he said he wanted to watch the next episode."