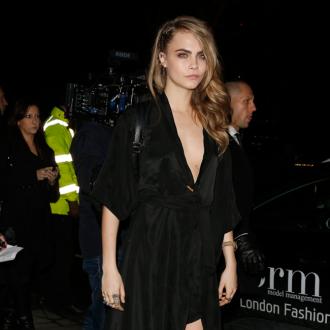 The 32-year-old actress, who has 11-month-old daughter Marlowe with her fiancé Tom Sturridge, has become inseparable with the 21-year-old model recently and has been pushing away her friends - including Suki Waterhouse - in order to spend time with Cara.

A source told the MailOnline: ''Sienna is relentless about wanting to spend time with Cara. She seems a bit obsessed.''

However, it seems Cara's close friendship with Sienna - who she was caught kissing at last year's Met Ball in New York City - may have contributed to the blonde beauty's split with Michelle Rodriguez, 35, in April.

The source explained: ''When Cara was dating US actress Michelle Rodriguez, Sienna was always getting involved and it caused an issue. She was always kissing Cara, which Michelle wasn't keen on.''

Michelle, who began dating the bisexual star earlier in the year, reportedly ended their romance as she was fed up of Cara's constant partying with young female celebrities.

A source said at the time: ''It looks like Michelle and Cara are now over for good. Michelle got tired of Cara constantly being pictured with other female celebs.''