Sir Paul McCartney is set to headline the opening ceremony of London 2012 Olympic Games alongside other British music stars. 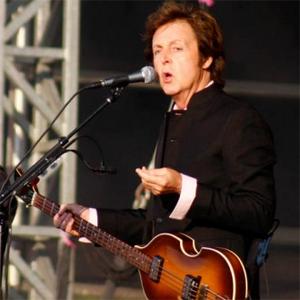 Sir Paul McCartney is set to headline the opening ceremony of the 2012 Olympic Games.

The Beatles legend has told organisers of London 2012 he is "up for" playing at the prestigious event on July 27, but which songs he will play and final arrangements for the show are yet to be finalised.

Paul will not, however, perform with his former Beatles bandmate Ringo Starr as he will be touring the US at the time.

Other British music legends such as The Rolling Stones and Led Zeppelin have ruled themselves out of performing at the event.

A source told the Daily Mirror newspaper: "The hope was to have the cream of British music all in the line-up but it now looks like Paul will be joined on stage by some younger stars.

"But of all the people you want, McCartney is number one. He is the ultimate showman and guaranteed to get the Olympics off to a great start."

Paul - whose fashion designer daughter Stella Mccartney is creating the kit for the British Olympic team - had hinted he might take part during an interview last month, saying: "I hear there's a rumour that I might be involved."