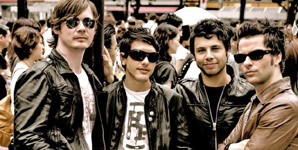 Celebrating ten years of success, Stereophonics return to Nottingham to show us how a gig should be.

It's hard to believe that Stereophonics have been going for ten years, but when you look back at their extensive back catalogue, fans of the band get a sense of just how far they have come and in my case just how songs define moments in my life.

There was an amazing buzz of excitement even before the band emerged, but as soon as they stepped onto the stage, Sterephonics were met with a roar of appreciation.

Completely professional, and after humbly acknowledging the excitement, it was straight into a loud, powerful, and energetic set.

Favourite tracks from the last ten years kept everyone standing and singing for the entire two hours, reminding us just why we were such big fans of the Welsh rockers.

'Traffic', 'The Bartender and the Thief', 'Mr Writer'. They were all there. On this cold December night, Stereophonics could do no wrong as they delivered exactly what we wanted from them.

The notable thing about seeing Stereophonics live is their confidence. They know they are good at what they do, but not in an arrogant way either. There is definite skill, and this comes across in every aspect of their performance.

Frontman Kelly Jones has a powerful voice which lends itself well to arena crowds. What's more is that he can actually hold a note, control an audience, and sing well, rather than the shouting we are seeing a lot of from bands at the moment. That beautifully gravelly voice had us all mesmerised.

Taking a break from some of the louder tracks, we saw some really amazing acoustic work. One which really sticks in everyone's mind was 'I Stopped to Fill My Car Up'.

This clearly was a celebration of ten years of Stereophonics, and how much they had achieved in that time. Mentioning previous visits to the city, Kelly Jones appeared genuine when he said how much it meant to the band moving from the basement to the main stage in Rock City.and now filling the arena.

To look at it from the bands perspective, to be a four piece from a Welsh village able to fill an arena (with a 9,000 capacity) must be quite thrilling. Not to mention the fact that every person in the arena that night knew every word to every track. That has got to be an amazing feeling, and great sense of achievement.

'Dakota' (perhaps the bands biggest track in terms of defining their international fame) was a predictable end to an encore, but the one we all wanted. Humbly thanking fans for coming and for their ongoing support over the past ten years, the band exited. Leaving us in a snowstorm of glitter, and on a complete high.