Things got political at Stormzy's most recent awards ceremony.

The GQ Men of the Year awards might seem like an unusual place to unite music with politics, but that's exactly what happened when Stormzy was presented the best solo artist prize by Labour party leader Jeremy Corbyn. Hilariously, the grime artist was far too drunk to take it seriously. Stormzy at the GQ Men of the Year Awards

The 24-year-old grime artist from South London has been making waves with his number one debut album 'Gang Signs & Prayer', and following his action in the #Grime4Corbyn campaign, it was only appropriate that the politician honour him at the ceremony.

'Our first winner is an artist who single-handedly ushered in a new era in British music', said Corbyn. 'This last year we've seen dramatic political events all across the world. Against this backdrop, we've seen the emergence of an incredible and very powerful artist, none more so than this artist who instead of signing his own record label, has used his own label to top the charts and change the face of music in this country.'

'He's one of London's most inspiring young men, encouraging his listeners to vote, to pray and, very importantly, to speak openly about mental health and their issues and problems. Whether it's speaking out against racism, supporting the victims of Grenfell, he's remained absolutely true to his roots and committed to his values throughout.'

Corbyn didn't exactly get an equally heartfelt acceptance speech in response, with Stormzy having to apologise for being 'a little bit drunk'. He confessed that he was truly honoured to be there surrounded by 'legends'. 'I got a selfie with Ronan Keating, are you mad? Come on!' He told the audience.

'I'm so happy to be here, blessed in a room full of talent, we got so much black excellence in this room as well, Tinie Tempah my brother, Anthony Joshua, Skepta', he continued. 'So incredible to be here with everyone.'

But he didn't stop there. It seemed like he was going to completely steer away from the political elephant in the room, but he didn't in the end. 'Big up Jeremy Corbyn', he said. 'I do want to use this to say Theresa May is a paigon, and you know what we're doing right now... yeah, trust me. Yeah, it's awkward, innit, when I say that? Innit? Trust.'

More: Stormzy gets on the Mercury Prize shortlist

Just for the record, a lot of people misheard the musician and thought he'd called the Prime Minister a 'pagan' or a 'pig', when in actual fact he was using urban slang for a deceitful person. 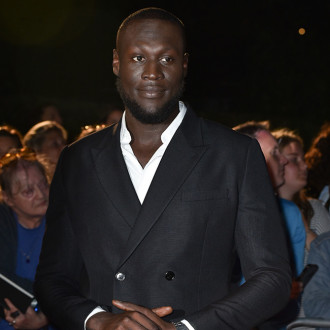