Actress Sutton Foster Is Finally Preparing To Jet Off On Honeymoon With Her New Husband Ted Griffin, Seven Months After They Wed. 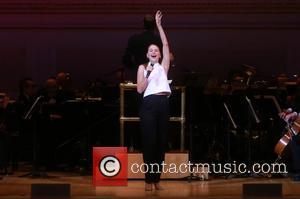 The stage and TV star reveals she and her screenwriter husband didn't have time to take the traditional vacation after their nuptials in October (14), so they postponed the trip until they could find a break in their busy schedules.

Foster realised they had a rare opening last week (ends17May15) and seized the opportunity to take the time off.

During an interview on U.S. talk show The View on Tuesday (19May15), she said, "We're about to go on our honeymoon. We leave on Friday. We're going to Italy. It all happened very quickly because our schedules are so unpredictable, and so literally last week, we were like, 'We have a window. Let's do it!'"

Foster and Griffin became engaged in 2013. She was previously married to actor Christian Borle and went on to date Boardwalk Empire's Bobby Cannavale.