The Formation: The Raconteurs are based in Nashville, Tennessee, a town with a rich musical history. In the summer of 2005, Benson and White got together and wrote 'Steady, As She Goes.' That year, they got together with the other two band members in Detroit and recorded whenever they all had time off from their other respective bands.

A band in Queensland, Australia had already begun using the name The Raconteurs and refused to change their name for the amount offered by the US band's record company. As a result, they are known as The Saboteurs in Australia.

Musical Career: The Raconteur's debut album was released in May 2006. Entitled Broken Boy Soldiers, the album featured their debut single 'Steady, As She Goes / Store Bought Bones.' The band's record labels are Third Man Recordings / XL Recordings in the UK and Third man Recordings / V2 Records in the U.S.

The band's debut live appearance was in March 2006 at the Liverpool Academy in England, a date which launched a small UK tour. Their first gig in the U.S. was at New York's Irving Plaza, in April 2006.

In November 2006, The Raconteurs opened for Bob Dylan for six dates in America. That same month, they played on the high profile British music show Later.With Jools Holland.

The Raconteurs have become known for their cover versions, including The Undertones' 'Teenage Kicks', Sonny Bono's 'Bang Bang (My Baby Shot Me Down), Gnarls Barkley's 'Crazy' and 'A House Is Not A Motel' by Love.

In 2007, the band's debut album was nominated for two Grammy Awards, for Best Rock Album and Best Rock Performance.

The Raconteurs' second album was entitled Consolers of the Lonely and was released in March 2008. The first single to be released from the album was 'Salute Your Solution.' In June 2008, The Raconteurs played at the 'Eden Sessions' at The Eden Project in Cornwall, England.

The Raconteurs, Consolers of the Lonely Album Review

The Raconteurs
Consolers of the Lonely
XL
Album Review 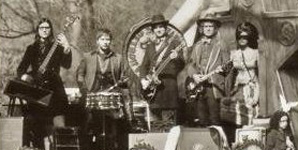 Continue reading: The Raconteurs, Consolers of the Lonely Album Review