The View - Hats Off To The Buskers Album Review

Review of Hats Off To The Buskers Album by The View

The View
Hats Off To The Buskers
Album Review 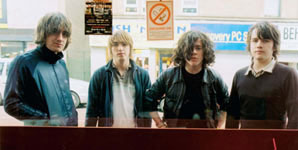 'Hats off to the buskers' is the first much anticipated album of 2007 and the anticipation is with just cause. Fans and music industry types alike already knew about and praised singles: 'Superstar tradesmen', 'Wasted little DJ's' and 'Same Jeans' all setting high hopes for the Scottish group, but what about the rest of the album?

Well the rest of the album isn't let down by the hype. Although the early singles are quite fast in temp the interlacing of a range of slower tracks shows the reason why the hype is justified and the album is strong in strength and depth. Softer, satirical ridden tracks such as 'Face for the radio' and 'Claudia' (A love song masking the identity of the girl with a dogs name they know.) all add to the musical version of Dundee's tourist board advert. Proud of their home town they show a range of emotions; both praise and castigation as they sing candidly about the area and people who live there.

Derisive true to life songs about getting jumped, antisocial behaviour and hanging around shops all regale the listener with a depiction of the bands lives in Dundee over the last few years. Speedy indie guitar rifs, drum work and sing-a-long catchy lyrics bolster the assortment of the indie disco tracks on the album and contrast nicely between the lighter tracks.

The album is solid, fresh and musically differing but there is a locality and themed sound to the album; the differing tempos and interchanging between singers really helps tie the album together and adds to the music. It's not a bad thing, the sound can be similar enough to enjoy but not too similar that I have to bring out horrible inbred jokes about the familiarity of each track.

What will be interesting is to see how living out of a suitcase affects their influences and sound for future releases. The album is rangy within their limits and shows great potential for future releases and further development. But I guess only time will tell how the limelight will affect them and their music.