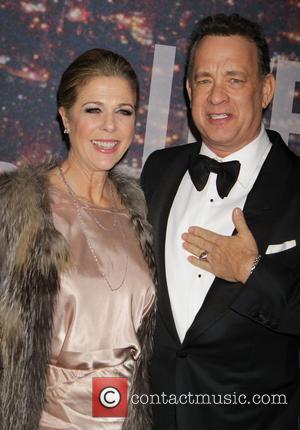 Picture: Tom Hanks and Rita Wilson - A host of stars including previous cast members were snapped as they arrived to the Rockerfeller Plaza for...

Actor Tom Hanks is set to be quizzed by James Corden as his first guest when he starts hosting U.S. Tv's The Late Late Show.

The British star will premier as host of the show next month (Mar15) after taking over from Craig Ferguson, who was presenter from 2005.

Bosses at U.S. Tv network CBS took to Twitter.com to confirm Hanks will be the main guest on Corden's much-anticipated debut show.

A spokesperson from the network writes, "Excited to announce our first guest for our first show will be @tomhanks! March 23! #LateLateShow."

In a recent interview with Digital Spy, Corden revealed Hanks was his dream guest, saying, "I'm a huge fan of Tom Hanks. I think he's had the best career of any other actor in Hollywood. I love the idea of sitting and chatting to him for a minute - I don't know if that will be possible, but it would be nice to try."

Since Ferguson's departure from the show in December (14), an array of all-star guests have taken over hosting duties, including comedienne Whitney Cummings, moviemaker Judd Apatow, actor Will Arnett, and singer John Mayer.