Rapper Tyler, The Creator Has Sparked Reports Suggesting His Odd Future Collective Is "No More" After Reminiscing About The Group In A Post On Social Media. 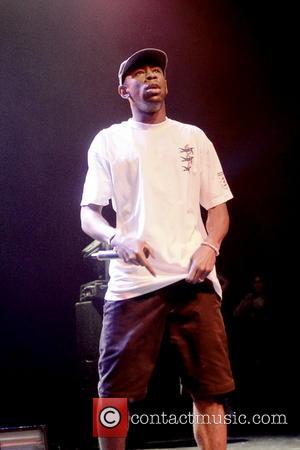 The hip-hop star took to Instagram on Wednesday (27May15) to share a photo of his crew from 2010, and in a series of follow up Twitter messages, he implied the group, full name Odd Future Wolf Gang Kill Them All (OFWGKTA), had disbanded.

He tweeted, "Damn going threw (sic) the old golf wang photos s**t. I miss my friends a lot. 5 years later isn't that long but wow soooo much has happened (sic)... Although its (sic) no more, those 7 letters are forever."

Fans took the post to mean the Los Angeles-based rappers had parted ways, and their fears appeared to be cemented by crewmember Earl Sweatshirt, who weighed in on the drama on Thursday (28May15).

He wrote, "No sympathy for male virgins who're in their feelings (emotional) about Tyler pointing out and solidifying the obvious".

Tyler, The Creator also returned to Twitter, admitting he was shocked by all the attention his post had received, tweeting, "All I was doing was looking at old photos with friends and thinking about how time flies, crazy how one tweet can stir so much... But that elephant is big as f**k lets (sic) be honest".

Odd Future formed in 2007 and also featured rappers Hodgy Beats, Domo Genesis, and Mike G, as well as singer/songwriter Frank Ocean. The group released its debut album, The OF Tape Vol. 2, in 2012, while each of the members also embarked on solo careers.