Outkast and Robin Thicke take the Wireless stage as Cara Delevingne looks on. 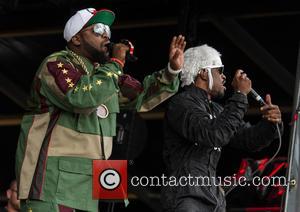 Outkast and Robin Thicke were among the star performers at this year's Wireless Festival in London and Birmingham, which saw a few familiar faces in the crowds as well as on the stages.

Outkast have been making their spectacular reunion on the festival circuit this year having appeared at numerous events including Coachella, CounterPoint, Firefly Festival, Big Guava Festival and Roskilde among many others.

Robin Thicke no doubt touched fans' hearts with a few renditions from his latest album 'Paula' at the UK festival event.

The singer has been on a mission to win back his wife Paula Patton with the release which features the tracks 'Get Her Back' and 'Still Madly Crazy'.

Rihanna To Perform Only UK Date At Wireless Festival